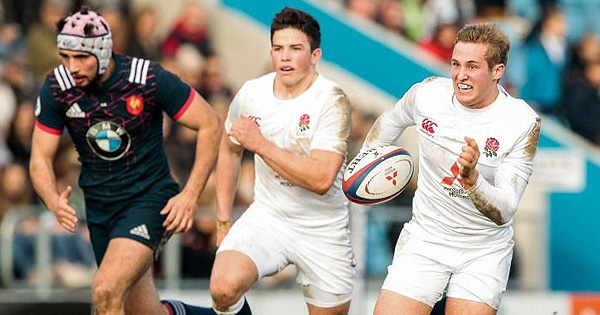 England, Wales and Ireland were winners as France, Italy and Scotland all lost out in the opening round of the Under-20s Six Nations, but who will come out on top in week two?

The Red Rose currently lead the standings on five points, with Wales second and Ireland third on four points respectively. Scotland occupy fourth with one point, while Italy and France both have no points.

These are the match-ups and here is the preview of what is to come in the second week of the 2017 Under-20s Six Nations Championship.

Although the Italians lost their opening day home match to Wales, they made life difficult for the defending champions for long periods.

Italy only trailed 5-10 at the break as they frustrated the visitors, but failed to score after the restart as Wales pulled clear on the scoreboard to condemn them to a 5-27 defeat.

The Azzurini will hope to do better against Ireland, who required a late Paul Boyle try converted by the unerring Johnny McPhillips to see off Scotland.

Nigel Carolan’s team trailed for much of the game and had to dig deep to hold out for a one-point win at the Broadwood Stadium.

But with one victory already in the bag, Ireland will be looking to build on their opening day success knowing that tests with France, Wales and England await them.

Much like their senior team, Wales U20s had to be patient in wearing down a stubborn Italy before claiming a comfortable 27-5 victory.

Tries from Rhys Carre, Kieran Williams and a sensational effort from Ryan Combeer secured the win for the Welsh in Milan, who also kept the Italians scoreless in the second half.

However, the biggest test for the defending champions is set to come on Friday evening when they welcome their fiercest rivals England to Colwyn Bay.

The Red Rose were rampant against France in Exeter, winning 59-17 in their opening match and scoring nine tries in the process.

Fly-half Max Malins was instrumental in scoring two tries and landing seven conversions as the English laid down a marker ahead of what is likely to be a title decider in North Wales.

France suffered a humiliating nine-try rout at the hands of England in their opening game and have responded by making wholesale changes for their home clash with Scotland.

In total, Les Bleuets have made 10 changes including a first start for fly-half Romain Ntamack – son of former French international Emile.

The humbled French will look to eradicate their last performance with victory over Scotland, who also suffered defeat in round one and are seeking their first win of the tournament.

Scotland went down by a narrow 19-20 against Ireland after the visitors scored a late converted try, despite leading for much of the match.

Josh Henderson almost snatched victory at the death, only for his penalty to shave the post as the Scots claimed a consolation losing bonus point ahead of their trip to France.