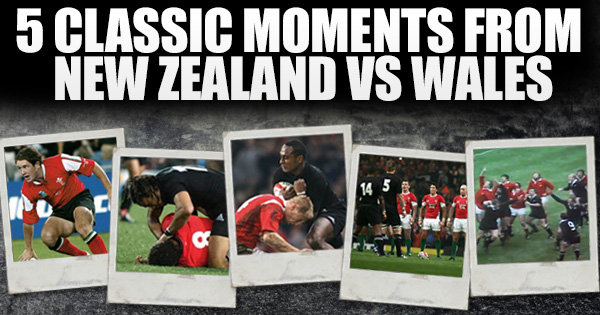 Wales have arrived in New Zealand in anticipation of their three-Test summer tour so we thought it was high time we had a nostalgic look-back through some of the great moments between the two sides. Featuring big tackles, great tries and plenty of controversy.

Only our septuagenarian Welsh friends will remember the last time Wales beat New Zealand back in 1953, although there have been some occasions during the last 63 years where the Red Dragons have fought the All Blacks all the way; usually in Cardiff as Wales have never scored more than 12 points in a Test in New Zealand.

However, in Sydney, it’s a different story. Who can forget when the Wales ‘B Team’ gave New Zealand the fright of their lives?

In the 2003 World Cup, no-one gave Steven Hansen’s Wales a chance against the ABs, not even Steve himself. He sent out the boys who hadn’t had much playing time yet, including “third-choice scrum-half” Shane Williams on the wing. The rest, as they say, is almost history.

It’s no surprise that there have been some pretty big hits down the years in games between the two sides. But surely there was none bigger than Jerry Collins’ marmalisation of Colin Charvis? Even by today’s standards, it’s a wince-inducing clip. We miss you, Jerry.

The closest the boys in red have come to claiming a Kiwi scalp was in 2004. Mike Ruddock was laying the groundwork for the upcoming Grand Slam, and two weeks after they had run South Africa close in losing 36-38, hopes of a rare victory were high.

In the last minute, Wales had a line-out in the Kiwi half, but couldn’t retain possession, and the chance was gone.

No discussion about the best moments between the two sides is complete without that Haka response. In 2008, there had been a lot of talk about a possible riposte to the Kiki war dance, with rumours of a Welsh version being practised behind closed doors, but instead what happened was simple, pure sporting theatre.

And finally, 1978 – a sore moment for any Welsh fan and something that should always be used as inspiration in the dressing room before kick-off.

A large part of rugby is seeing how much you can get away with. But what happened on the 11th November that year has had Welsh fans seething ever since.

It was 12-10 to Wales with six minutes to go, before All Blacks second-rower Andy Hayden made Greg Louganis look like Peter Kaye in a John Smith’s advert.

2016 TOUR FIXTURES (all games at 8.35am GMT unless specified otherwise)