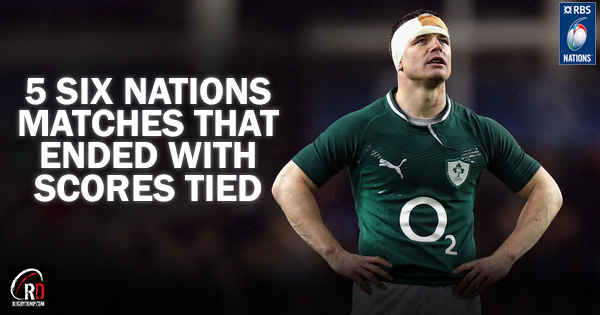 Ireland and Wales’ 16-16 draw at the weekend was not the first time two Six Nations sides have cancelled each other out. Although draws in rugby are rare, there has been five other such games in the Championship where teams have shared the spoils.

While the Irish and Welsh ruled out their hopes of a Grand Slam or Triple Crown, both nations will draw some comfort from the fact they avoided defeat and live to fight another day.

Here are five famous Six Nations draws which prove not every result is a case of do or die.

The first ever drawn match in the Six Nations saw Wales race into a 25-6 second-half lead at Murrayfield with three drop-goals and four penalities from Neil Jenkins plus a Mark Taylor try.

But Scotland fought back with three superb tries from Chris Paterson, James McLaren and Tom Smith with minutes remaining to salvage a point in the first drawn match between the sides.

Paterson’s great try can be seen above, with a few extra links below

Italy claimed their first ever Championship point away from home after a scrappy draw in Cardiff. Wales started the game strongly with tries from Mark Jones and Stephen Jones before the Azzurri stormed back through Ezio Galon and Pablo Canavosio to level the scores.

The visitors though might have won it had Ramiro Pez not missed four kicks at goal.

In a game high on passion, but low on chances both sides cancelled each other out in a nervy draw. The result was the 18th draw between the sides – a record between two international teams – and their first since 1989.

Ireland ended France’s Grand Slam hopes as they held out to secure an entertaining draw at the Stade de France. The Irish led 17-6 at the break thanks to a brace of Tommy Bowe tries, however Les Bleus hit back through a Wesley Fofana score and Morgan Parra’s penalties to set up a tense finish where Lionel Beauxis missed two drop-goal attempts. Highlights above

For the second year running Ireland had to survive a strong France comeback to claim another draw. The Irish led 13-3 at the interval following Jamie Heaslip’s try and Paddy Jackson’s kicks, but once again could not hang on to their advantage as Les Bleus drew level from a late Louis Picamoles’ try to earn their first point of the 2013 campaign. Highlights above

Hopefully this weekend there won’t be any repeats!

All Blacks star Damian McKenzie has crossed for his first Tokyo Suntory Sungoliath try since joining the Japanese club for the 2022 League One season.