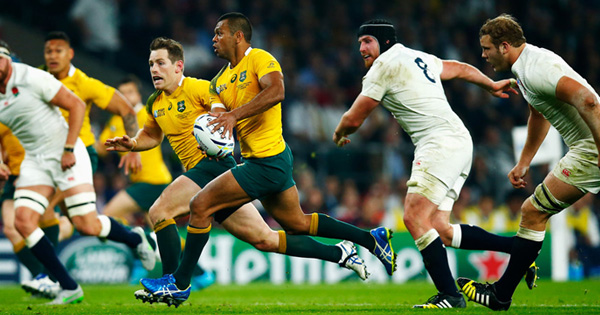 A total of 19 tries were scored over the course of a dramatic third weekend of Rugby World Cup 2015, which saw tournament hosts England knocked out of the competition in the pool stages for the first time in history. Here is a recap of the best.

Australia were utterly dominant in their 33-13 victory at Twickenham – their biggest winning margin over England – with fly-half Bernard Foley bagging 28 points. The Wallabies weren’t the only team on fine form as Daniel Hourcade’s Argentina boosted their qualifiation hopes with a bonus point 45-16 win over Tonga.

All of these featured in World Rugby’s Top 5 Tries of Week 3 alongside Kiwi flyer Waisake Naholo and Scottish wing Tommy Seymour.

It had been an inauspicious start for the Pumas against Tonga but once they got going they were almost unstoppable. The try was made by the searing pace of winger Santiago Cordero – who scored a wonder try last week against Georgia – as he burst up the blindside. Quick ball and innumerable support runner made Imhoff’s try a mere walk-in.

If England’s task had been difficult before, after the previous week’s defeat to Wales, it was made nigh on impossible after the Wallabies out-half’s second try at Twickenham. That score and a further penalty made it 20-3 at half-time. Foley’s was certainly the pick of the bunch after beautifully combining with Kurtley Beale to go in virtually unopposed.

The Fijian-born flyer looked certain to miss the whole tournament just a month ago after a leg fracture. But some homegrown healing methods in his native land sparked an almost unbelievable recovery. That recovery was completed as he raced clear for the first try in a subdued performance against Georgia during the week.

Scotland were definitely under the cosh against the Sprigboks in Newcastle on Saturday. Trailing 20-6 early in the second-half, it seemed only a matter of time before Heyneke Meyer’s team would cross again. But a brilliant – if slightly lucky – interception break from Duncan Weir gave the Scots hope. Clearly tiring, Weir superbly offloaded in the tackle to winger Tim Visser, who in turn, gave the try-scoring pass to Seymour to finish off a coast-to-coast move.

For 60 minutes against Argentina, Tonga were firmly in the game. The South-Sea islanders took a early lead and finished off the half with a classy score from ex-Northampton prop Tonga’Uiha. The magic in this try came from winger Telusa Veainu who stepped the oncoming Argentine defence before feeding his prop with a sublime offload as he was being bundled into touch.

Check out the top 5 tries of the week below:

Blair Kinghorn was at the heart of the action as Edinburgh moved up to second in the United Rugby Championship with a 24-10 victory against Benetton.

Seven-try Leinster bounce back from Ulster defeat against Connacht

Normal service resumed at the RDS as Leinster overcame a fast-starting Connacht to post a 47-19 United Rugby Championship derby win.

Gloucester ended a run of five successive Gallagher Premiership defeats against Bristol as they won an intense west country derby 27-10 at Kingsholm.

Australian women's side off to a flying start at Dubai Sevens

Australia's rugby women have maintained their brilliant form to again look like the team to beat in the latest world series Dubai Sevens tournament.