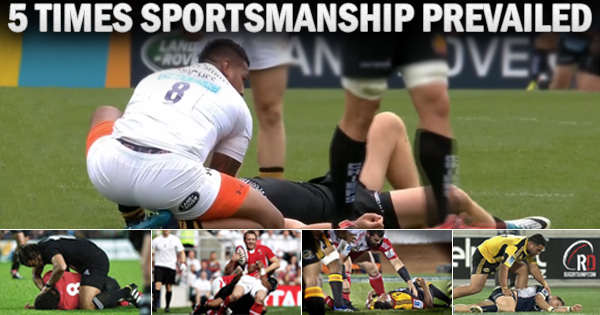 Recently, Wasps back-rower Nathan Hughes was commended for his display of sportsmanship after Exeter’s Sam Simmonds was injured during the Chief’s 31-17 victory. It reminded fans of the human side to rugby and that player welfare transcends the sport.

There have been plenty of instances in the past where sportsmanship has taken precedence over the actual game. We take a look at five of the most memorable acts below.

Wales headed down to New Zealand in 2003 expecting a rough time against the All Blacks. And boy did they get one. A 55-3 thumping ensued and for Colin Charvis, he got a little more than he anticipated. He copped a huge hit from the late Jerry Collins, but Tana Umaga immediately attended to Charvis once it was clear the Welsh back-row was not entirely compus mentus.

Umaga eventually became something of a piraha in Britain and Ireland following his spear tackle on Brian O’Driscoll in the 2005 Lions tour, but this act of sportsmanship showed a more representative side to the All Black legend.

You can view the infamous tackle below, however at the time the television producers didn’t realise what Umaga was doing, so there was no clear footage of it on the live feed. Read about it here

Owen Franks has a reputation of being somewhat of a bulldozer and he lived up to this in 2011 against the Chiefs. Tanerau Latimer found out exactly what Franks was about when he was knocked out cold by the Crusaders prop.

Quickly on the scene was hooker Cory Flynn, who like Umaga, sought to put Latimer in the recovery position until the team’s medical staff got onto the field.

In another World Cup warm-up match, Wales travelled to Twickenham to play England. Morgan Stoddart had been heavily tipped to make the squad for the tournament in New Zealand but suffered a nasty broken leg at the start of the second half.

England scrum-half Danny Care was acutely aware of this and sportingly signalled to referee Steve Walsh to halt the game. Stoddart was stretchered off and subsequently ruled out of the World Cup.

Hurricanes beast Motu Matu’u laid down the law to both Mark Gerard and Lachlan Mitchell back in 2012. Matu’u’s reaction for the latter was particuarly impressive, moving the Rebels centre into the recovery position as quickly as possible after his lights-out hit.

It was unclear at the time whether or not Simmonds had suffered any concussion, but Hughes took it upon himself to make sure his opposite number was attended to.

The increased push for concussion assessments and player welfare is much needed and World Rugby say enhancements in procedures are on the cards.

Through his actions on the field, it is clear that Hughes – among many others – are full aware of the implications of head knocks and are taking necessary steps to look after their fellow players too.