A life in Quarters: Farewell to George Robson, Tom Williams and Ugo Monye 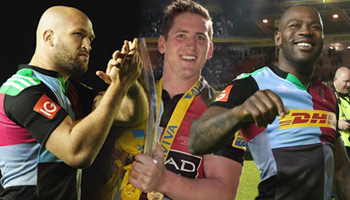 George Robson, Tom Williams and Ugo Monye are names that any Harlequins fan, regardless of age or rugby knowledge will know or have heard about. These are three players that have been at the centre of all things Harlequins for the last decade.

This season for Harlequins, despite being marred with disappointment on the field, is the final season of these three legends in the famous quartered jersey.

Harlequins fans must say goodbye to the three legends, all of which have double centuries when it comes to club appearances.

Below are a videos of the players going through the highlights of the Harlequins career, as well as funny snippets from their teammates. If you learn anything from these videos, its that it is probably best not to stand near Tom Williams and a puddle!

We wish them all well in their future endeavours!