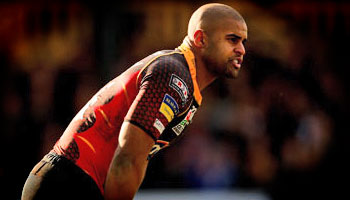 Last weekend Newport Gwent Dragons were comfortably beaten by Perpignan in the Amlin Challenge Cup. There was a big tackle from Aled Brew that stood out though, and has since been requested on more than one occasion.

While on Saturday the Dragons won convincingly, a week ago Perpignan were too good for them despite wing Aled Brew scoring just after half time to bring them back into the game.

The Dragons are reportedly hopeful that Brew will stick around and sign a new deal to stay at Rodney Parade. The thinking is that his Wales ambitions will keep him there when his contract runs out, despite apparent interest from France, and Perpignan in particular.

Brew wasn’t included in Warren Gatland’s Wales squad for the Six Nations however, leading to further speculation that he might look elsewhere. Dragons coach Darren Edwards quashed those fears though, stating that he believes Brew won’t give up that easily.

“Aled has got a fighting attitude and he will keep on going. He was an outsider for the World Cup but didn’t accept it, kept going and got his reward. I know he won’t take this rolling down and hopefully it will be his performances with the Dragons that get him back into the Wales squad.

“Aled is so valuable to our attacking game and now that Shane Williams is gone I just wish he was given a proper run. Only then would we be able to see if he can make the same impact on the international stage as he does for us,” he said.

With hits like this one on David Mele, you’d think Brew will continue knocking on the door.