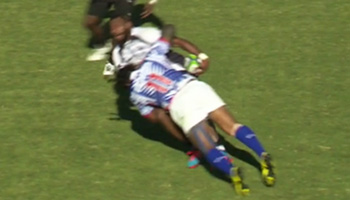 Samoa and Fiji played out an extremely entertaining 30-30 draw in their Pacific Nations Cup clash in Sacramento, California at the weekend. There were plenty of big collisions, but none more enjoyable than this trademark Alesana Tuilagi tackle.

It was another fascinating round of Pacific Nations Cup rugby, as the USA upset Rugby World Cup 2015 Pool B opponents Japan 23-18, while Tonga beat hosts Canada 28-18 in Burnaby.

The battle for Pacific pride went the full 80 minutes as Samoa and Fiji couldn’t be seperated, despite a some great bits of running rugby. A late 78th minute penalty by Samoan replacement Patrick Fa’apale ended up cancelling out Fiji’s earlier 76th minute kick.

A feature of the match was not only the high tempo, but the brutal clashes between some giant players. And there is no bigger than Alesana Tuilagi, who put a monster hit in on Waisea Nayacalevu, who at 6ft5 and over 100kg’s, is far from the smallest wing in world rugby himself.

The crowd loved it, as did former US players Dallen Stanford and Dan Power, who both came out with a number of rugbyisms in commentary to keep the viewers entertained.

“The biggest hit in Sacramento since the Beatles rolled through in the sixties!”

Tuilagi’s younger brother, Vavae, actually made his debut for Samoa recently and was involved in number of highlights, including a big charge that sent USA back Thretton Palamo flying.

The PNC pool stages conclude on Wednesday in Toronto when USA tackle Tonga, Pool B leaders Fiji face Japan and Canada meet Pool A leaders Samoa. The final rankings will then determine who faces who on the finals day in Vancouver on 3 August.

View the big tackle below, and official highlights on page two