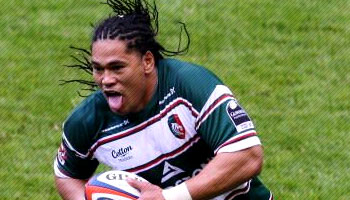 Big Samoan and Leicester Tigers wing Alesana Tuilagi today showed us another fine example of just how lethal he can be in full stride, when he absolutely flattened little Wasps scrum half Eoin Reddan in the Guinness Premiership final at Twickenham.

Last season Tuilagi was a bit more prolific, and has struggled to fire to an extent this time round, bar a superb try in the Semi Finals of the same competition.

Fair enough, this match up between big Alex and Reddan is somewhat of a mismatch, considering the size of each player, but it’s still a spectacular site to see the big flyer steam rolling guys out the way while barely breaking stride.

Leicester and Tuilagi just didn’t have what they needed today though, and we saw Wasps go on to lift the trophy and bid a fitting farewell to their retiring captain Lawrence Dallaglio. Tribute video to follow shortly.