Alex Cuthbert and Warren Gatland ahead of Wales vs Australia 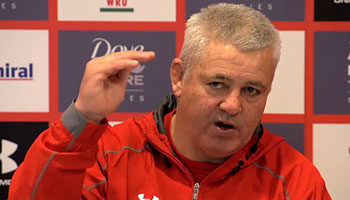 Wales play Australia in their final game of the Autumn Internationals on Saturday, with both sides looking for a win to finish their campaigns on a high note. Lions winger Alex Cuthbert returns from injury, boosting the home side’s backline threat out wide.

“It’s great to have Alex and Scott (Williams) available and they bring a lot of experience into the backline,” said coach Warren Gatland.

“Alex and the medical teams have worked really hard to ensure he is ready for this weekend and it’s great to be able to bring him back into the side. We thought Owen (Williams) performed well in the centre against Tonga and he gets another opportunity on Saturday.

“There is a lot of experience in the pack for what is going to be a very physical game. We are looking to finish the series off well, the last three games against Australia have gone right down to the wire and I don’t expect anything different this weekend.”

For the Wallabies, Nick Cummins and Adam Ashley-Cooper return from suspension.

“We’re treating this week a little bit like our Grand Final, so it’s pleasing to bring in some big game players with a lot of experience,” said coach Ewen McKenzie.

“I think everyone will be extremely motivated by the circumstances of the game and the opportunity to play Wales in their backyard. For us to finish on a high would be good reward for a lot of the hard work being done.”