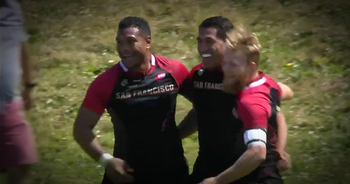 All Blacks legend Mils Muliaina managed to grab his first try for new club San Francisco at the weekend, with his first touch of the ball in USA Pro Rugby. While he has scored far more impressive efforts, it is nice to see a player of his calibre on a new stage.

Muliaina almost walked in after supporting fly-half Volney Rouse who had burst through some poor tackling.

It was the former New Zealand international’s first match for San Francisco after arriving in America on Monday. The fullback has played all over the rugby world including Italian side Zebre, newly-crowned PRO12 champions Connacht and the Red Hurricanes in Japan.

San Fran are currently fourth out of five teams in the inaugral Pro Rugby league, their 35-20 win over Ohio being their first victory of the season.

You can view the try below as well as a post-match interview with Muliaina.

credit: pro rugby north america
note: if the videos above don’t work for you, you can view the try here