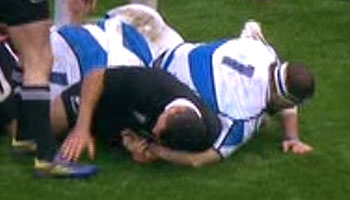 Here is a quick look at an incident that Scotland fans were unhappy about this past weekend. The outrage came as it looked as though All Black Tamati Ellison grabbed and chicken winged prop Ryan Grant as they both dived for the ball early in the game.

Grant ended up with his arm twisted in an uncomfortable looking position before Tim Visser and Cory Jane got involved. The two players separated and that was it, but fans tweeted furiously about it this week, including some to IRB Chief Executive Officer Brett Gosper.

Gosper, who has taken some serious heat over what some view as a lenient one week ban for Adam Thomson for use of the boot, replied to the request for a citing saying: “Saw it. Understand. Apparently debatable it would warrant red card according to experts.”

When this incident happened on Saturday many took to Twitter to share their thoughts on it, including former All Black and friend of Ellison’s, Toulouse flyhalf Luke McAlister.

However, if you watch closely you’ll see that it may not be as malicious as it appears, as Grant actually grabbed and held Ellison’s arm first (pause video around 21 seconds), which the All Black then tried to wriggle free from, and they both ended up in an awkward, dangerous looking position.

Depending on which side of the fence you sit, you may still view it differently, but with only one angle and no complaints from Scotland, there was quite possibly nothing in it.