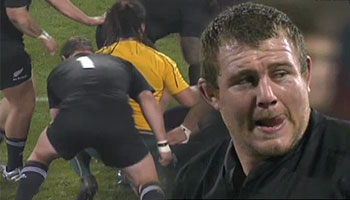 All Black prop Tony Woodcock seems to have dodged a bullet this weekend after his charge on Wallaby hooker Saia Faingaa on Saturday. Woodcock not only got off with just a warning, but he wasnt cited after the game either, surprising many.

The Tri Nations has been somewhat of a shambles refereeing wise this year as every match, up until this weekend, has been affected by players being sent from the field. So while it was evident that South African referee Jonathan Kaplan was doing what he could to avoid switching up the numbers, his lenient approach hasnt gone down well.

Woodcocks hit on Faingaa was pretty much a cheap shot as he came in from behind and hit the hooker in the back as he was getting up. Kaplan chose to only give a warning and a penalty, despite the clearout making some of the previous yellow cards weve seen look even more ridiculous than we had thought before.

Faingaa himself played down the incident when asked if he thought it should have been a yellow card for Woodcock.

“Mate, I don’t really remember it. That’s just part of the game, but yeah, he got me good. I don’t know.. I haven’t seen it yet, so I don’t know. If it was then it was, but I was probably in the wrong place anyway.”

New Zealand coach Graham Henry tried to make it seem less severe than it was.

“He just got frustrated. Guys were offside, standing there in the road I guess, and he just removed him. I didn’t think it was particularly bad. Goodness me, it’s a game of rugby isn’t it?”

Woodcock has surprisingly avoided any further sanction from the citing commissioner, so will be on the plane to South Africa with his team. The question now is if Kaplan will be publicly admonished by Paddy OBrien in the same fashion that fellow ref Cobus Wessells was last week.

“Under the laws of the game, I don’t think he had a choice,” said Dwyer.

“It was foul play and therefore a compulsory yellow card. The Australian player was not in the ruck, he had his back to Woodcock. But Woodcock clobbered him and there were no arms used either to suggest a tackle. It was an illegal charge without arms.

“I don’t understand how some referees follow the law book but others don’t.”

Wed got the impression that even if a ref makes a mistake on the field, a citing could take place and dangerous play would be dealt with. That would simply mean an investigation, which doesnt always need to lead to a suspension.

Its surprising then that this wasnt even cited, especially given the events of the past month. What’s your take on it?