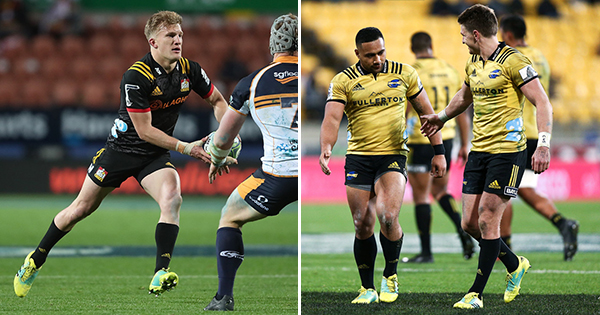 Both Damian McKenzie and Beauden Barrett were in fine form over the weekend, and in a case of “what one can do, the other can do better”, both playmakers pulled off these brilliant no-look passes to set up tries.

With the Chiefs already ahead 10-0 against the Brumbies, the hosts won a turnover ball that set the counter-attacking wizardry in motion. After some hard-earned metres, Sam Cane found McKenzie and the rest was down to his skill and pace.

With a behind-the-back pass that would make any pro basketball star jealous, McKenzie set up Brad Weber beautifully in stride for a streaking run down to the 22, only to then follow the play and sprint in himself for the score.

As for Barrett, the two-time player of the year showed exactly why he’s earned those distinctions. He juggled this intercept from the Blues lineout before finding Ngani Laumape for yet another try on the night.

Even though this highlight belonged to Barrett, the spotlight for the Hurricanes fully belonged to Laumape, as he scored a mind-blowing four tries in total.

New Zealand are truly spoiled for riches at fly half. Making the difficult look extremely easy, McKenzie and Barrett keep coming up with new and creative ways to leave jaws on the floor.

McKenzie’s behind-the-back pass (video will start at 0:58 in):