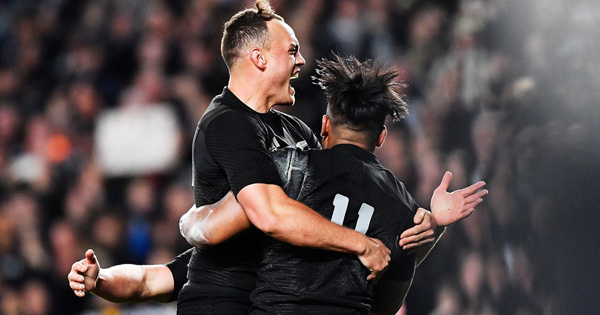 The All Blacks have become the first top tier team to ever reach 18 successive Test victories, surpassing the record that they jointly held with the Springboks for many years. Their 37-10 win over the Wallabies in Eden Park puts them up there with the greatest of all time.

The contest was evenly poised shortly after the break, but after a Wallabies try was denied by the TMO, momentum swung towards the home team, who powered to 22 unanswered points.

Julian Savea kicked into gear, scoring two tries and providing another for Dane Coles after a thrilling passage of play that saw possession change hands a number of times.

“They came out and gave it to us for 60 minutes of that game.. It was tough, it was real tough,” said halfback TJ Perenara after the match, himself a tryscorer from a charge down.

“It was physical, they put us under the pump. They played fast, and then our bench came on and I thought they changed the game for us.”

“We’re very proud that we’ve got to 18, but we didn’t do it easy, we had to work hard for it. It took until that 60/65 minute mark until we actually got really on top.”

Wallabies skipper Stephen Moore meanwhile identified a reason nobody can beat the All Blacks.

“I think you take the fact that the game goes for 80 minutes, that’s the main thing. So, 50 (minutes) is not good enough to win here.

“We’re past the stage of saying ‘we did this and that well’ when we come over here. We need to stick to our gameplan for 80 minutes, and it worked for 50, but it needs to work for 80 to win.”

Highlights wrap below, and you can view extended (33 mins) highlights on page two