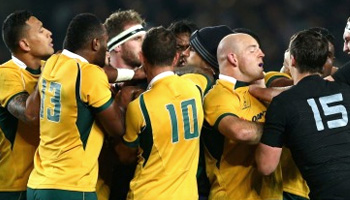 The All Blacks management have been fined for a ‘technical zone breach’ following their 41-13 win over the Wallabies at the weekend. Liam Messam, acting as waterboy, took to the field to join in on a scuffle, which is totally against SANZAR regulations.

In the first half an incident occured whereby Ma’a Nonu dropped his knee and pushed the ball into the face of Stephen Moore. There wasn’t much in it but it sparked a bit of a push and shove brawl between the two sides, with Messam, wearing a waterboy bib and a beanie, suddenly appearing in the middle of it.

Under tournament rules, water carriers are not permitted within the playing enclosure while the match is in progress. While they often get away with being on the field at various time, getting involved in a scuffle draws huge attention to it, so SANZAR weren’t too impressed.

The All Blacks team management were issued a fine of $2000 as a result.

“We fully accept that we breached the sideline protocols during the match on the weekend and we accept the fine. I have made it clear to the All Blacks team management that it was a mistake we can not repeat.”

On the Sky NZ feed commentator Grant Nisbett was initially disgusted at what was going on. “There’s a bloke with a beanie on in there involved in the scrap – for heaven’s sake.” Until he realised it was Messam, and laughed it off.