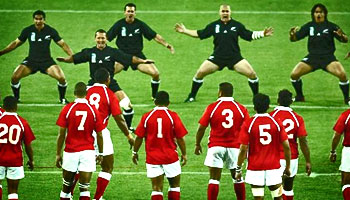 As you will have noticed with the way the site is now organised (and still being organised), you can now access and browse archives in a much easier fashion. With that in mind, this classic video from the 2003 RWC needs to be added to RD, so now is a good time to do it.

Having a quick look, it’s got almost 8 million views on Youtube since being uploaded five years again. That’s an impressive amout in relation to other great rugby videos, but it’s a testiment to what a great moment it was in the sport, and we’ll be treated to the same again tomorrow when the two sides face off again.

Tonga has been given the green light to go first with their traditional challenge tomorrow, and it’s up to the All Blacks as to when they choose to respond with the Haka. In 2003 it was a brilliant start to the game at Suncorp Stadium, and tomorrow it will be an apt start to the Rugby World Cup, hosted of course in a part of the world that is well known for it’s culture and traditions.

“Where we have two teams performing cultural challenges … Team A, who in this case on Friday night is Tonga, will start their challenge first,” said Tournament director Kit McConnell.

Tongan captain Finau Maka has said he’ll prefer if the All Blacks wait until they finish their Sipi Tau.

There will be another clash of Haka’s later in the tournament, when Fiji and Samoa meet.

For now here’s a quick look at this great clip that will always be remembered as a wonderful moment from the 2003 RWC in Australia, despite the fact that the All Blacks won the game 91-7.