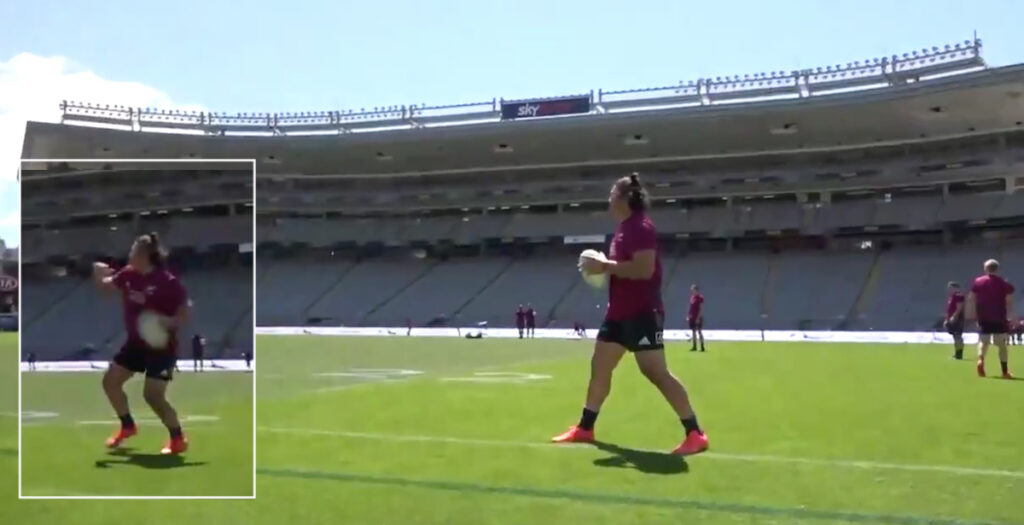 All Blacks winger Caleb Clarke showed off his American football skills with an outrageous one-handed pass during Bledisloe Cup training.

The overarm pass looks like it travelled about 50 metres to playmaker Beauden Barrett during a late training session at Eden Park ahead of Sunday’s clash against the Wallabies.

The 21-year-old made his All Blacks debut last weekend against Australia with a significant impact off the bench on the left wing.

NFL-style passes have been a regular appearance in professional rugby in recent months with New Zealand’s Jordie Barrett producing this outstanding effort for Taranaki in the Mitre 10 Cup.

Another similar but equally brilliant example came through Clarke’s former Blues teammate and Harlequins star Joe Marchant in the Premiership earlier this season.

'After yesterday's performance, Jack has really taken control of that 12 jersey': Kiwi stars say Goodhue will be the anchor of the All Blacks midfield

Goodhue and Lienert-Brown delivered a solid performance in defence and attack in Ioane's absence, with Goodhue becoming the lynchpin of the All Blacks set-piece while he was on the field.

'He doesn't look out of place': Ian Foster's rave review for two of New Zealand's newest All Blacks

New Zealand's 27-7 drubbing of Australia on Sunday was a match of particular significance for two members of Ian Foster's squad.

Few players have dominated the test scene in such comprehensive fashion in the space of just two tests like Caleb Clarke did against the Wallabies.

The All Blacks squad which will travel to Australia for the Tri Nations tournament, has been named, with two new players called into the squad as cover.