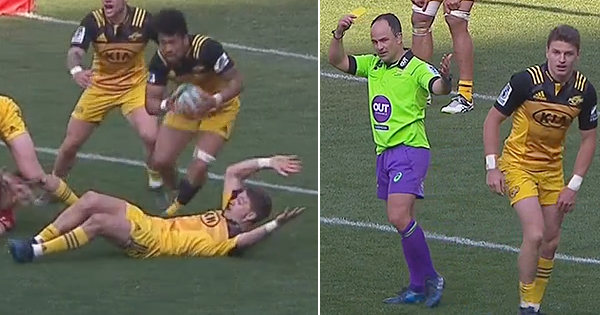 This weekend’s Super Rugby final is set to be a thriller and like any other high profile sporting event, it has already attracted some criticism and controversy. Chief among the criticism is the perceived potential for bias on the part of South African referee, Jaco Peyper.

Right or wrong, this mainly stems from his decision to give Beauden Barret a much talked about yellow card early in the second half of last weekend’s semi-final on the Lions home turf.

As you probably know by now, the Lions managed to erase a rather large deficit to the Hurricanes to claim victory and another spot in the Super Rugby final.

More than a few thought the card to be fairly harsh and very influential on the outcome.

Either way, these decisions are part of the ebb and flow of any match and teams should consider the consequences of any lack in discipline.

Peyper was unhappy with what he felt to be a deliberate act of interference on the part of the All Black fly half. As you can see from the clip, Barrett made a nice tackle on winger Ruan Combrinck but dragged the ball away with his legs as he was rolling away.

To lose their potent playmaker at such a time was clearly a setback for the Hurricanes. In post-match reactions, both teams admitted that the card had a significant impact on the match.

Others, such as former Springbok Nick Mallett, admitted: “It was a pretty tough decision against Beauden.”

One can imagine the pressure Peyper will be under as there will undoubtedly be questions raised by fans of both teams should their side lose. However, at this point, all that matters is that Peyper enjoys the full confidence of SANZAAR. Speaking to Sport24, CEO Andy Marinos said:

“The selection criteria for all match offical appointments for the last two years follows a clear tournament policy – as agreed by the SANZAAR executive committee and the tournament’s stakeholders – that such appointments be merit-based.

“This merit-based policy was reflected with the appointment last year of New Zealand referee Glen Jackson to referee the Hurricanes v Lions final in Wellington. SANZAAR stands behind the policy and believes the best referees should be available to officiate the best matches.”

Potential controversies aside, the match officials are set and we’re one day closer to an explosive Super Rugby final showdown in Johannesburg. Ellis Park is already sold out.