All the highlights from the Glasgow Sevens as Fiji reign supreme 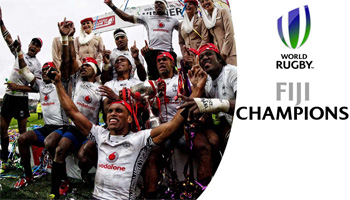 With only one round left in the HSBC Sevens World Series, there was plenty on the line for all the teams heading to Glasgow this weekend. Check out all the highlights here, as Fiji left it late to claim the title beating current champions, New Zealand, 24-17.

Glasgow produced another scintillating spectacle of sevens rugby, with incredible tries, some sizeable collisions, and the usual dose of flair over the two days in Scotland.

Fiji were trailing 12-5 at half time in the Cup Final, a position with which coach Ben Ryan was clearly unhappy, evidenced by his passionate and inspiring teamtalk. His side duly responded as substitute, Apasai Domolailai, scored two second-half tries to defeat the Kiwis.

Ryan is setting his sights on lifting the trophy next weekend.

“This is the most amount of wins – four – that we’ve done in one season. We have put ourselves in a great position to win our first World Series for 10 years. We have a fit team and we want to win back-to-backs.”

Fiji, South Africa and New Zealand now occupy the top three spots in the overall table and have all successfully qualified for Rio 2016. With England boasting a 16 point lead over fifth placed Australia, they have all but secured the final automatic Olympic spot, but it won’t be absolutely certain until next weekend.

The final round of the 2015 World Series will take place at Twickenham this Saturday and Sunday, and it promises to be electric.

View highlights from Day 2 below, including the final, with Day 1’s highlights on page 2.