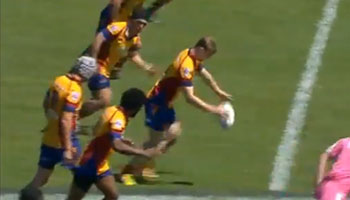 Incredibly strong winds hit Ashburton on the South Island on Saturday, affecting the Meads Cup Final between Mid Canterbury and North Otago to the point that twenty minutes in, a restart kick got blown back 50m, well over the deal ball line.

North Otago’s Ed Keohane had already seen the power of the gale-force northwesterly, but while he may have attempted to keep this restart low, mother nature had other ideas.

“Have they learned their lesson from the last kickoff that went into touch,” remarked the commentator, before watching on in astonishment as the ball got swooped up and travelled all the way over the dead ball line, resulting in a scrum restart on halfway.

Perhaps the closest we’ve seen to this type of thing in the past is when in 2008, then Leinster flyhalf Felipe Contepomi’s penalty was blown back, after it had already gone through the posts.