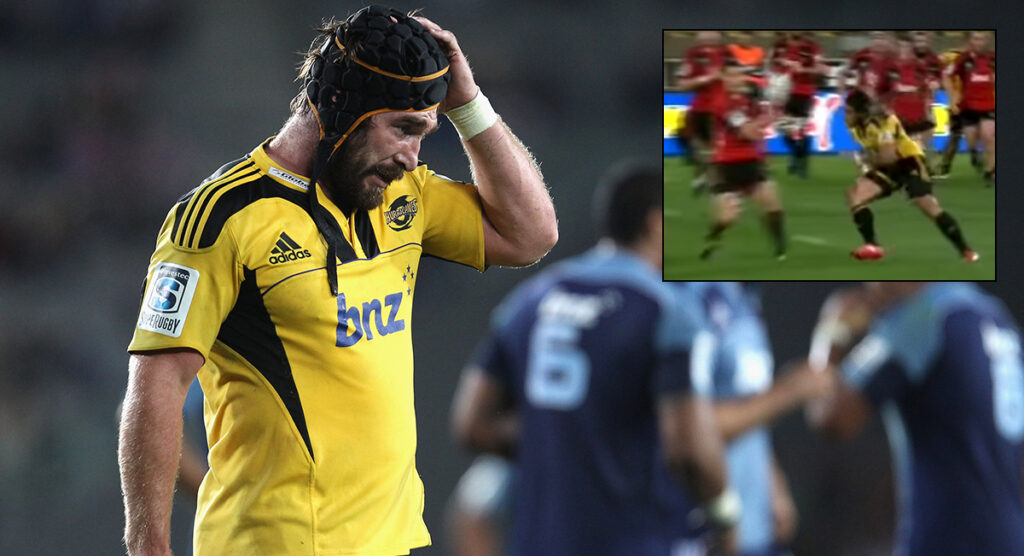 Andrew Hore and Maa Nonu bid farewell to Wellington this past weekend as they played their final matches for the Hurricanes, ending off with a moment that will no doubt be remembered as one of the more amusing of the season.

Nonu and Hore were told recently that their services are no longer wanted in Wellington. They join a list of long serving players who finished up on the weekend, including front rowers John Schwalger and Neemia Tialata. Piri Weepu is also uncertain about his future.

While over 17 000 attended the game against the Crusaders at Westpac Stadium, there was no big farewell ceremony, no speeches, not even a mention of it. Instead the players quietly said their goodbyes to the crowd, and ended Hurricanes careers that have spanned years, and over 100 caps each.

It wasnt a happy send-off result wise, as the Crusaders won the tight contest 16-9, but early in the game Nonu imposed himself, taking out All Black golden boy Dan Carter with a big hit. It was called up for being a late tackle, which was probably harsh, as no arms were the real problem there.

Referee Chris Pollock received a report from the touchline, then acted on it as he penalised the center. “Is there a new rule that you can’t tackle Dan Carter?” enquired Andrew Hore cheekily, hinting at how valuable and important a player he is in New Zealand.

The hooker later joked that touchjudge Shane McDermott used to play in his club team and his brother used to keep him out, so he thought maybe he was trying to get one back. Hore also seemed to be having a bit of a laugh with the opposing front row.

“I took 70 minutes to get a smile out of Owen Franks and Ben Franks out there, but I finally got one, so I was pleased.”

Nonu and Hore will both be a part of the World Cup, but after that are unsure where theyre heading. Hore has said hed like to stay in New Zealand, but has had interest from Agen in France, while there has been talk of Nonu being linked to Ospreys in Wales, and the Sharks in South Africa.

“Up until three weeks rugby was always a game for me but over the last couple of weeks I’ve come to realise that it’s a job and that’s the way decisions are made.

“That’s probably the pleasing thing about getting back to the farm, the sheep don’t care what you look like and you can just chase them around,” said farmer Hore.