Andrew Mehrtens zaps the crowd after a winning dropgoal 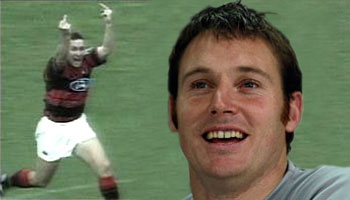 Known for being one of the most intimidating stadiums in the world of rugby, Loftus Versfeld has a reputation for being a place you don’t want to be in if you’re not supporting the Bulls.

In 1999 the Crusaders took on the Northern Bulls, as they were known back then, in a Super 12 match that went right down to the wire.

The Bulls lead by more than 15 at half time, but let their lead slip thanks to some courageous play by the men from Christchurch.

All Black star flyhalf Andrew Mehrtens was getting hassled by the crowd all match, and when he slotted the winning drop goal in injury time to seal a memorable away win, Mehrtens celebrated by giving the crowd the old one fingered salute and two armed zap.

The game was remembered more for the reaction from Mehrtens than the winning dropgoal.

Mehrts has always had a great sense of humour, so this was admittedly quite funny, although it caused a bit of a stir at the time.

The final score was 30-28 to the Canterbury Crusaders.