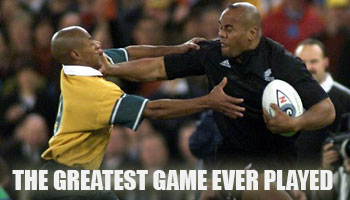 In the build up to the Rugby Championship, that kicks off next weekend, ARU TV had a chat with some of the legends that took part in what is widely referred to as the Greatest Game Ever Played.

We featured the classic match, between the Wallabies and All Blacks in 2000, with full highlights a few years ago, but now we get a chance to see it from the players’ perspective.

Wallaby backs Joe Roff, Stephen Larkham and Rod Kafer talk about their memories of what is without a doubt one of the most incredible games of rugby ever played.