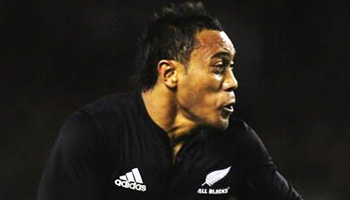 All Black winger Anthony Tuitavake has shown us on numerous occasions this season that other than his electric speed and stepping, he is also quite lethal with his tackling. We saw it on Odwa Ndungane earlier this year, and he repeated it against the English on Saturday.

The first was on fullback Mike Brown, and was actually very similar to the Ndungane hit. Tuitavake used his speed to get up there and put pressure on, effecting a solid tackle.

The then took Strettled to the ground, albeit not incredibly hard, but he made his presence felt and let the opposition backs know he was around.

The third hit in this clip is on James Haskell, and the thing about this one, was you could hear the impact as Tuitavake flew into him at speed from far as he seemingly tripped over a player on the ground.

Some nice hits, enhancing the adage that wings aren’t there just for scoring tries.