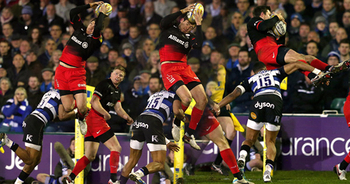 Anthony Watson received a straight red card in a fiery Aviva Premiership match between Bath and Saracens at the Rec on Saturday. The visiting Saracens won the match 30-10 after some clinical play, but it was the red card that everyone was discussing post match.

Watson took fullback Alex Goode out in the air, leaving the officials with little option but to apply the laws of the game. The England winger was furious as he left the field, waving his hands in the air and remonstrating with those on the sideline.

Referee Greg Garner took his time to make the decision to send off Watson, consulting with his TMO before making the call. Watson had words with Chris Ashton, who was involved not only before, but after the challenge.

“By the letter of the law, it is a sending off, isn’t it? He got underneath Alex, and Alex landed awkwardly,” commented Bath head coach Mike Ford. “You get underneath the guy jumping, take his legs away and he lands awkwardly like he did, it’s a red.

“Anthony is gutted. He was going for the ball, Ashton checked his run, and then all of a sudden he is underneath the player. It was an accident.”

Saracens coach Mark McCall agreed with that assessment, saying it was unintentional.

“The letter of the law says it is possibly a red card, but I feel sorry for Anthony because it was not intentional. His route to Alex was slightly disrupted by one of our players. He had to change course, he doesn’t time it well, but it was what it was. It didn’t change the course of the game.”

Amongst the controversy, there was reportedly an incident of a fan confronting the referee in the changeroom post match, and allegations of eye gouging during mauls.

“The mauls, if you have ever been in one, there are arms and fingers flying all over the place. I doubt very much there is anything untoward there,” said Ford.

UPDATE: David Wilson and George Kruis have both since been cited and will appear in front of an RFU disciplinary panel after they were charged with acts contrary to good sportsmanship.

Wilson allegedly made contact with the eyes or eye area of Kruis, while Kruis allegedly bit Wilson.

The Watson incident is included in the official highlights video below (1:21)