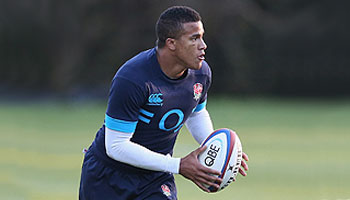 As England prepare for the upcoming Six Nations, youngsters such as Anthony Watson will be looking to impress head coach Stuart Lancaster. Watson has been picked in the England Saxons team that will face the Irish Wolfhounds in Gloucester on Saturday.

Northampton Saints flanker Calum Clark will captain the team in his first appearance for the Saxons. Six others in the starting line-up are making their debuts at this level: wing Anthony Watson, centre Sam Hill, prop Alex Waller, lock Charlie Matthews and flanker Luke Wallace, and No. 8 Dave Ewers.

Watson, 19, joins the Saxons after being temporarily released from England’s RBS 6 Nations squad to give him senior international experience on the wing.

“Calum Clark has been a positive influence from the moment he arrived in camp, he commands the respect of the group and I’m sure he will lead from the front,” said Joe Lydon, RFU Head of International Player Development.

There are only three full internationals in the Saxons line-up with eight caps between them in the shape of London Wasps scrum half Joe Simpson (one cap), Gloucester Rugby fly half Burns (three) and wing Charlie Sharples (four).

Rhys Ruddock will captain the Wolfhounds, while Craig Gilroy is one of five Ulsterman in the matchday XV. Fellow Ulstermen Darren Cave, Iain Henderson, Dan Tuohy and Rob Herring will also start for the Wolfhounds.

Among the replacements are British and Irish Lion Simon Zebo, highly-rated Connacht scrum half Kieran Marmion and hooker Richardt Strauss, who is selected just one week after returning to the Leinster side following heart surgery.