As we all know, when one thinks of the Haka, we think of the All Blacks. In reality there are multiple ‘Hakas’ that take place around the country of New Zealand, and indeed the Pacific Islands too. It’s part of their culture, but has now been used at a US college football match.

While all Pacific Island teams at the Rugby World Cup have been performing their own traditional war dances, as seen here, this one is clearly the Haka, except really badly done.

It’s led by Wildcat’s offensive lineman Lene Maiava, who no doubt has some connections to New Zealand or Polynesian culture, but something is just a bit off about this, and vocal rugby fans haven’t been shy to share their thoughts about it on the internet.

UPDATE (Oct 2nd): The Arizona Wildcats have decided to do away with the pre-game ritual after widespread negative reaction, following the video above going viral.

As reported by the New Zealand Herald, a spokesman told the newspaper that they will no longer be performing the Haka, after thousands of opinions were shared online, and one Kiwi expat started a petition. They have apologised for any offence caused. 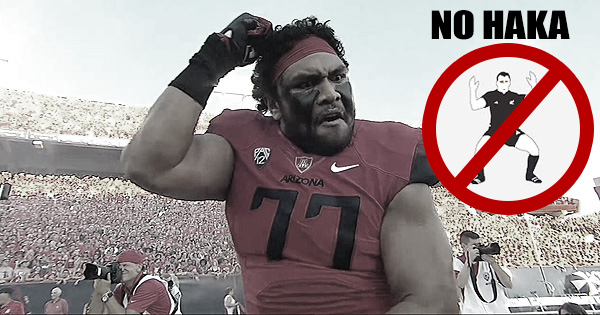 “The Arizona football program has a strong lineage of Polynesian student-athletes, and in 2009, a group of players wished to share this aspect of their culture with their teammates and community,” the spokesman explained.

“As a result, the Ka Mate haka, which had been popularized throughout the world by the All Blacks and recognized by other members of the team, became part of the program’s on-field pregame preparation starting that year.

“Even though that intent remains the same today, we’ve been made aware that a segment of the population is unhappy that the haka is being performed. As a result, we have decided to discontinue the activity.”