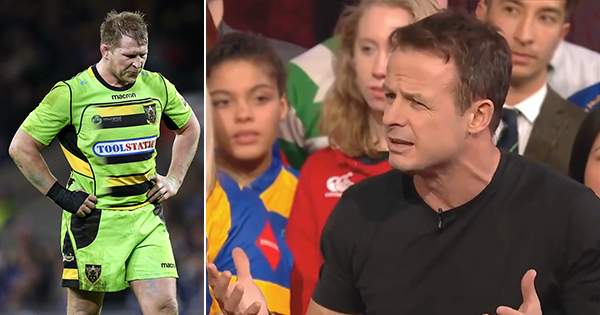 There’s never a dull moment when Austin Healey is tossing around opinions. Such was the case on BT Sport’s Rugby Tonight when Healey threw current England hooker and captain Dylan Hartley under the bus, saying he shouldn’t make the Saints or the England national squad.

When talking about Hartley’s sub-par play at club level, Healey said: “His performances for Saints don’t warrant a place in their team, let alone the England team… I don’t understand why he was made England captain.”

By now, it isn’t breaking news that Hartley has never been a stranger to disciplinary issues and has made a career of missing matches as a result. This has certainly been at the forefront for his detractors ever since Eddie Jones selected him for the role.

Healey is well known for giving a hot take, usually whether he’s pressed or not. That doesn’t necessarily mean he’s wrong. And he certainly has the conviction in this particular circumstance, listing Dave Ward, Luke Cowan-Dickie, and Jamie George as all being better at the position.

At this point, however, the only opinion of consequence is that of Eddie Jones, and he seems quite content with the current leadership structure.

“As long as Dylan’s attitude and his body are right, he brings something to the table we need and that is strong leadership.”

What do you think? Is Hartley the right man to lead England into 2018 and beyond?