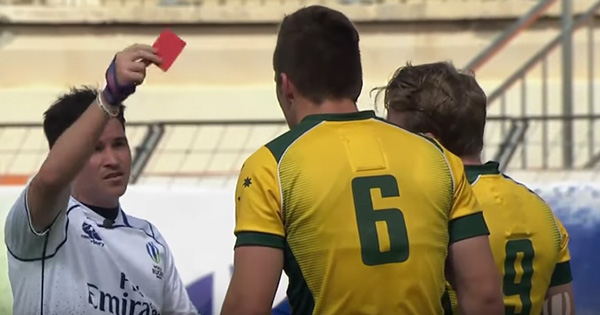 The recent amendment to the ruck laws that took effect in May explicitly addressed the kicking of a loose ball in a ruck, which is now illegal. At the U20 Championship, the application was instrumental in producing this red card between Australia vs Italy.

Italy’s Andrea De Masi was the recipient of a boot to the head by Australia’s Michael Wood while at the bottom of a ruck.

The amendment to 15.16(e) states: Players must not: kick, or attempt to kick, the ball out of a ruck. In Wood’s case, he also struck De Masi in the back of the head with his boot, contravening law 9.20(b) of Dangerous Play.

In this particular case, the referee felt he had no choice, as safety had become an issue, and brandished a red card. Australia went on to win the match 44-15.

While this was a perfect example of exactly why this law changed and the occurence it’s trying to prevent, controversial cards have become somewhat of a theme over the past two weekends.

World Rugby reversed Angus Garder’s red card on Benjamin Fall for his collision with Beauden Barrett after just 12 minutes into the test in Wellington. That decision then prompted Rugby Australia to come to Gardner’s defence.

While we often question law changes, especially experimental (‘nipple line’, anyone?), this change in particular is a good example of them working and being correctly applied.