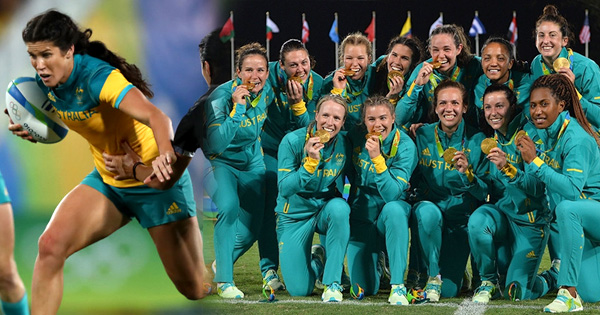 The Australian Women’s 7s team have made history by becoming the first team to win Olympic Gold in Rugby 7s, after beating New Zealand 24-17 in the final in Rio last night. New Zealand, whose star player Portia Woodman had an awful time, took Silver while Canada, who were outstanding against Great Britain, deservedly got Bronze.

It’s the first time that medals have been awarded for rugby in 92 years, since the USA won rugby Gold in fifteens in 1924. Rugby’s profile, and particularly the Women’s game, took massive strides forward as we witnessed an entertaining final day with some thrilling play, and intense physicality.

The top two teams in the world made the final and after New Zealand started well, Australia bounced back, with the likes of Charlotte Caslick leading the way with some superb play.

The Silver medalists scored consolation tries but it was all Australia, storming to Gold after at one stage leading by a thoroughly convincing 24-5.

.@CharlieCaslick: “To be able to do this with my best friends it’s just the best feeling in the world.” #OneTeam pic.twitter.com/Il2rtaJzmX

It was an emotional finish for the New Zealand team, who acknowledged their supporters with a tearful Haka after the game.

????An emotional haka from the @nz7s ladies after winning #silver at the #Olympics! Well played to all #Rugby7s pic.twitter.com/aq69A46mB8

“I’ve always wanted to represent New Zealand at an Olympic Games and to do it at rugby sevens was a goal of mine. Just to be out there playing and advocating women’s rugby is very special to me and I can’t wait to see how far it grows going into Tokyo (in 2020).”

Australian co-captain Shannon Parry meanwhile was still taking it all in.

“When I started the game women’s rugby in Australia wasn’t very big and it was very much a minority sport. To think eight years down the track I’m now an Olympian, I play rugby as a full-time job.

“I just think how far the game has gone but also I look to the future and think what are the future opportunities that I’ll have?”

The ladies spoke at a function following the match, still on cloud nine with they’ve achieved.

As rugby sevens continues to grow due to it’s fast paced action and incredible skill, the likes of actor Matthew McConaughey, known to be a huge sports fan, are taking notice.

He was there to watch the games, and also met with some of the players.

Queensland don't know whether to pack for two days or 10 but are ready for anything at the pointy end of the Super Rugby Pacific season.

Cornell du Preez: 'Two people died in the beds next to mine' - from intensive care to Toulon glory

Promising hooker Kapeli Pifeleti is looking to step on the career accelerator at Saracens and start winning trophies at the London club in the same team as his esteemed cousins, Mako and Billy.