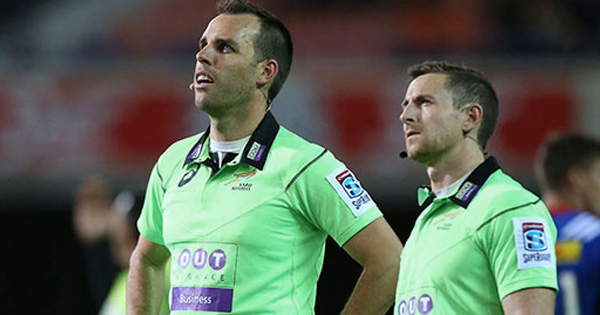 As Super Rugby starts up again, SANZAAR announced recently that it has made an amendment to the Television Match Official (TMO) protocol for the 2017 Super Rugby season. Here is a quick explanation of what is different for this year’s tournament.

The amendment reflects the emerging technology that is now available in terms of the number of camera angles and the use of split-screen television software.

Plus SANZAAR’s desire to tighten the process and make it more accurate, more efficient and to reduce the time taken for the decision-making process. So what is different in 2017?

Should the referee or one of his team (Assistant Referees or TMO), wish to initiate a review of a decision (via replay by the TMO), the referee will first state to the TMO his “on-field decision” based on his real-time view.

The TMO will then review the given incident accordingly based on the referee’s assessment.

The TMO must be persuaded that the evidence is compelling before proving the on-field referee’s call wrong, and therefore overturning the call.

‘What’ can be referred for review remains the same as the World Rugby Protocol (no change). The “two phases back only” protocol still stands.

The only exception to this process is in the case of a potential foul play incident. The referee can choose to review the incident on the big screen (or request the TMO to review it if the replay screen is of poor quality) with no “on-field decision” prior to the review.

Commenting on the new protocol SANZAAR CEO Andy Marinos said, “The general consensus is that with the new technology and the protocol of a definitive “on-field call”, time is saved and the awkward conversation between referee and TMO that occurs from time to time is eliminated.”

“SANZAAR is confident this will enhance the fan’s match experience. This also aligns our sport’s process with that of almost all the other high performance sports, which use a television replay protocol.