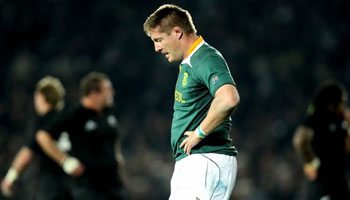 Springbok lock Bakkies Botha has been suspended for nine weeks following his opening minute of the Test headbutt on New Zealands Jimmy Cowan in Auckland on Saturday. He will be out until the end of the Tri Nations.

Botha expressed remorse for the attack after appearing before a SANZAR judicial hearing in Auckland earlier today. He said he was deeply upset, but accepted the ruling.

“I sincerely regret the incident. I have let my team, my country and family down and I have done an injustice to the Springbok jersey and what it stands for,” Botha said.

“I apologise to Jimmy Cowan and the New Zealand rugby public for what happened. Rugby is a physical sport but it has to be played within the boundaries and spirit of the law. I truly regret my actions and will make sure that I put the extended time away from the game to positive use and return to playing with the right attitude”.

The incident occurred in the first minute after Botha had charged down a Cowan kick. He then chased, but was held back by the Kiwi halfback. He waved his arms in protestation, but his claims for a penalty were ignored by referee Alan Lewis. He then tackled Cowan and followed up with the head.

It was missed by the officials at the time, but the headbutt was replayed multiple times, both on tv and in the stadium. It was deemed to be middle of the range in terms of seriousness, but Bothas disciplinary record contributed towards the lengthy ban.

“Hes got a history. Hes probably lucky he didnt get more than nine weeks,” New Zealand coach Graeme Henry said. “It was just one of those things that happens in a game which is not part of the game and has been dealt with correctly.”

“SARU views any incident of foul play in a very serious light. Bakkies remains an important player in Springbok rugby and I have discussed with him the extent of his actions and the implications it could have on the team, himself personally and his family,” Marinos said.

Captain John Smit summed things up best. “Only Bakkies can explain what goes on in his head.”

The two sides go into battle again next weekend in Wellington, for game two of the Tri Nations.

All Blacks power past the Springboks in Auckland