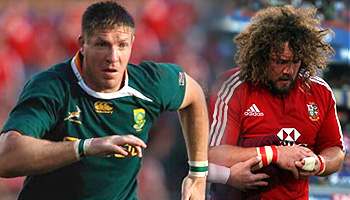 Springbok lock Bakkies Botha has been banned for two weeks after being found guilty of ‘dangerous charging’ on Adam Jones, an incident that left the British & Irish Lions prop with a dislocated shoulder.

Botha will now miss the third and final Test next weekend, as will Jones, who left the field at the time, with the injury requiring surgery.

Both Botha and Schalk Burger attended a hearing in Pretoria on Sunday night, which resulted in the two week suspension for Botha, and 8 weeks for Burger after his first minute of the Test eye gouge on wing Luke Fitzgerald.

While there has been plenty of talk about dirty tactics, former England captain and British & Irish Lion Will Carling has come out in defence of the Springboks.

“When all is said and done though, South Africa won the test and with that the series and have proved that they are one, if not ‘the’, strongest team in the World at the moment,” Carling wrote on his website.

“Did the Boks cheat, were they just thugs?” Carling continued, ” No, not in my mind. If Burger gouged that is inexcusable and the referee should have sent him off there and then. But apart from that, what else did they do that was thuggery? It was hard for sure, bloody hard, but isn’t that Test rugby? Botha’s illegal challenge on Jones? well what about BOD’s illegal tackle? It is swings and roundabouts and the Boks have always been a very very physical side. It is nothing new,” he said.

“The Lions can and should be proud of what they have achieved in throwing four ‘teams’ together in a matter of weeks and secondly the Boks are a bloody good, tough side, with many great players and great characters, and they should not be branded thugs, or cheats. They have won the test series, and congratulations to them.”

Update: Jones has since come out in defence of Botha, saying the following.

“Botha shouldn’t have been banned for it, nowhere near it. I don’t have any complaints. He just cleared me out of the ruck and I got caught. Everyone counter-rucks nowadays and, if anything, I was in the wrong place. He just hit me and I was unlucky.

“So I was surprised to see he got banned. I know we didn’t cite him so I don’t know why the independent commissioner did. It was just a fair ruck from a hard player. When I have met him before he seems like a tidy enough bloke so I’m not seeing it as anything malicious.”

Lets hear your thoughts
Worthy of a two week suspension, or was it a legal clear out with an unfortunate injury? Also what do you think of what Carling had to say?

Time: 01:03
Please note: Keep things clean and respectful, or your comments will be removed. Random Anonymous comments will also be deleted, so use a name rather.