Barbarians vs Fiji Centenary Match at Twickenham - 20% Off Discount 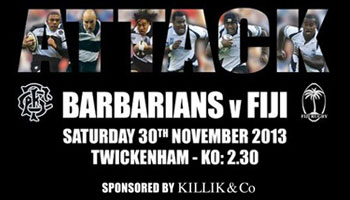 The Barbarians host Fiji at Twickenham on November 30th for an eagerly anticipated fixture that marks one hundred years of rugby in Fiji, and has already attracted ticket sales of 60,000. Below is more info on the game, as well as a ticketing discount for you.

The all-conquering All Blacks’ head coach Steve Hansen will be in charge of the Barbarians when the world famous touring club take on Fiji in front of a bumper crowd at Twickenham.

There will be the traditional mix of big names from around the globe, from two of the most attacking sides in world rugby, with a guaranteed free flowing spectacle on show.

Amongst the first to confirm their Barbarians availability are Springboks’ skipper Jean de Villiers and 68-times capped flanker Schalk Burger, who says he loves everything about the BaaBaas.

“In the modern era it’s phenomenal that there is something still like them that harks back to the original spirit of the game. After my first appearance, my reaction was to ask if I could sign a 10-year deal because it was exactly what I felt rugby should be like,” he said.

The Barbarians previously played Fiji in 1970 when the Islanders shocked the rugby world with a six-try victory that established them as a huge attraction wherever they played.

With such an exciting prospect on hand, demand for tickets is high, so we have got a 20% DISCOUNT organised for you. To receive the 20% off offer follow this link and then type the following password (in CAPS) – BARBARIANFC