Barrington cleared while Barritt gets banned after no card 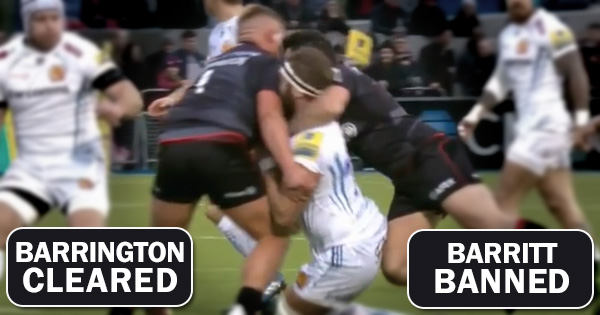 Following a dangerous challenge that resulted in a nasty concussion at the weekend, Saracens duo Richard Barrington and Brad Barritt both faced disciplinary hearings in London last night. In an interesting twist, Barrington was cleared and Barritt was suspended.

The two players tackled Exeter Chiefs lock Geoff Parling high, resulting in him needing to be taken off the field as he was knocked out cold.

At the time it was Barrington that saw red, while Barritt got off scot-free despite clearly tackling high. In the discussion when we first posted the video and story, opinions were mixed but the general feeling was that Barritt was very lucky to be overlooked.

The dangerous charge was dismissed though, and Barrington is free to play with immediate effect.

Barritt, however, pleaded guilty and was given a three-week suspension. He is free to play again on Tuesday 31st January.

The RFU Disciplinary panel said: “Following very careful analysis, the panel found that Mr Barrington had not committed the act of foul play alleged. The incident arose out of the specific dynamic of Mr Parling falling unconscious into what would have otherwise been a legitimate contact by Mr Barrington.

“In line with the new sanctions a mid-range entry of six weeks was imposed on Mr Barritt reduced to three weeks in light of mitigation including his guilty plea.”