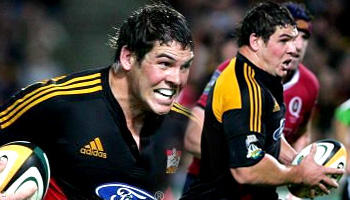 The Chiefs game against the Reds last weekend was one of the most entertaining games of the season. It was a great example of the ELV’s working advantageously, with a spectacle of running rugby and great skill on display from both sides.

There was one particular moment in the game though that I thought just had to be seen by the Rugbydump visitors, particularly as it was almost entered into our archives of great prop tries.

119Kg Chiefs prop Ben May broke the line after a great offload from fullback Mils Muliana on half way. May showed great acceleration as he sped off then dummied to the chip kick, before audaciously throwing a goose step! He fell short only inches from the line after a great tackle from Reds fullback Clinton Schifcofske, which resulted in the subsequent pass going forward, which was marginal from what I could see.

May took a bit of stick from his teammates for his stunning 50m run, but admitted afterwards he probably should have passed to give his team the try-scoring opportunity.

“I was just in the clear. I had wingers outside me but I had a bit of tunnel vision, I guess. I’ve had plenty of ribbing about that,” he said.