Best Tries from week two of the End of Year Tests 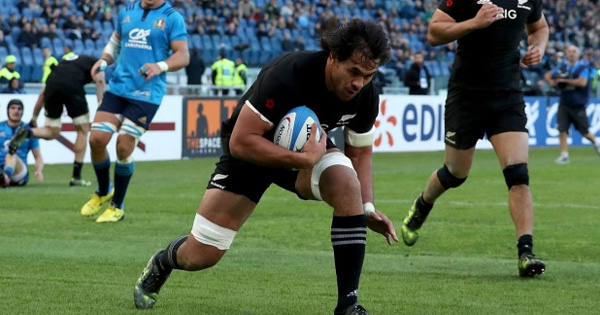 Another great weekend of international Rugby means another round of amazing tries. There was plenty of action to go around from a full slate of both tier one and tier two matches, including Wales bouncing back against Argentina, England continuing their winning streak, and yet another New Zealand team getting beat by a team from Ireland.

Things got off to a cracking start for the Maori All Blacks against Munster after a moving tribute and haka in honor of the late Anthony Foley. Ambrose Curtis touched down for the score after a lengthy team effort, only to be outdone by two kick and chase tries from Munster that had Thomond Park erupting at another stunning Irish victory.

Melani Nanai made a name for himself with the Barbarians, showing some lovely feet in the midweek match against the Czech Republic as part of their 71-0 romp in Prague, and they were at it again against Fiji, winning 40-7 on Friday night.

French flair was finally, once again on full display, with Virimi Vakatawa scoring a hat-trick to help run all over Samoa, 52-8. It was a comprehensive effort that France have been seeking for a long time.

Ireland had no trouble with Canada, seeing them off 52-21, and showed some great running and offloading for Tiernan O’Halloran’s try. Ireland will definitely be looking for a repeat of Chicago this coming Saturday, as they appear to be firing on all cylinders.

WEEK ONE: View the best tries from week one

England have yet to lose under Eddie Jones’ tenure and their winning ways continued at Twickenham as tries from Jonny May and George Ford helped push past South Africa 37-21.

Australia broke Scottish hearts once again as Tevita Kuridrani’s strong run and score delivered the knock-out blow. Scotland had been leading in the 74th minute, based in part on a magnificent Huw Jones try, but once again came up just short against the Wallabies, 22-23.

Wales are once again in the win column with a 24-20 victory in what was a penalty-strewn affair, but the try of the match belonged to Juan Martin Hernandez.

Last but not least, the All Blacks were looking to send a message after their loss to Ireland and they did not disappoint, running in 10 tries to dismantle Italy 68-10.

The top score had to be Steven Luatua’s try that began from Aaron Cruden’s cross-kick to Codie Taylor, who then showed brilliant skill to send Elliot Dixon racing to the try line before he offloaded for the score.

Perhaps most refreshing to see was the incredibly spirited performances of the tier two nations, most notably the thrilling ending to the Germany vs Uruguay test. Germany were awarded a penalty in extra time and Chris Hilsenbeck nailed the subsequent penalty for the 24-21 win.

Which try from week two is your favorite?