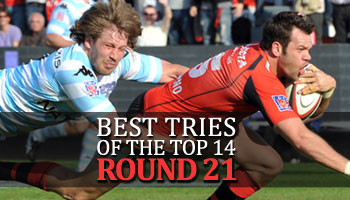 We’ve got another ten of the best tries from the Top 14, this time from Round 21 of action, which took place last weekend. As the name suggests, it features the top tries from the round, as picked by television station Canal+.

It’s Monday and as usual there’s a mad scramble to catch up on everything that’s happened around the world of rugby over the last few days. You’d think that’s a relatively easy task, but it can be quite a challenge, especially when maintaining a standard.

With that in mind, it’s best to make sure nothing is missed out on so rather than kick on with games that took place this past weekend, here is a video that was actually broadcast this weekend, but features tries from matches in Round 21, which took place last weekend. Still following? Good.

There’s a fair mix of tries in this one, with a few examples of oustanding handling, great support play, and of course raw speed. As the old cliche goes: speed – you won’t find it on ebay.

Stade Francais produced some amazing rugby against Agen, which is in fact a game we’ve been meaning to post, so may do at some stage this week if possible. Felipe Contepomi played a huge part in that one, and it was nice to see former Wallaby number eight cross for a great try too.

Enjoy the compilation, and as mention on our Facebook page earlier, if there’s anything you spotted this weekend that you think could be posted on the site, please get in touch.