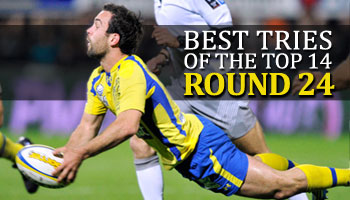 This weekend is yet another busy one in the world of rugby, with not only domestic finals, but Sevens too. It’s been a fairly quiet week on RD, for various reasons, so here’s a video of some top quality tries in the Top 14 as we attempt to catch up.

Last night was the first of the RaboDirect Pro12 semi-finals, between Ospreys and Munster, so we’ll get highlights of that posted shortly. Leinster and Glasgow Warriors face off later today.

Also today are the two Aviva Premiership semi-finals, so keep a look out for those, and not too far away there’s the London Sevens. Super Rugby continues down south too, with Round 12, so we’ll get highlights of the latest games up soon, and then in France the Top 14 heads into another crucial weekend, with play off places still up for grabs.

The tries video below was broadcast last weekend, and features the top ten tries from the week before, Round 24. There’s some excellent efforts, with the number one try going to Wallaby legend George Smith, who finished off a very impressive Stade Francais try against Perpignan.

If you spot anything this weekend that you think could be featured on the site, please make a note and get in touch, and we’ll see what we can do about sharing it with everyone else soon.