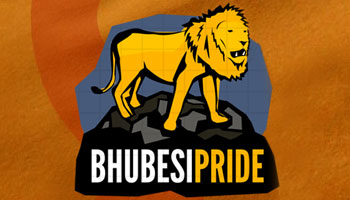 Bhubesi Pride is a growing initiative with real momentum. When we started reporting on the unique project in 2010 we felt it was a massive undertaking and to implement a sustainable programme, it was going to require some very careful planning.

Two years on – and after some follow-up videos you may have seen here on RD – we catch up with Bhubesi Pride’s Founder, Richard Bennett, to learn of the latest developments and plans ahead.

“I was recently invited to Sochi in Russia”, Richard explained, “and it was here at Peace and Sports International Forum that we had been nominated for NGO of the Year 2012. This came about after extensive planning and preparation in 2011 – officially our Year 1 – so to have this level of recognition so soon was a massive honour.

“It gave me an opportunity to reflect on the fantastic work our group of guys did this year. The environment and people we worked with in Africa were all new to them, but they slotted in brilliantly, and laid a worthy foundation for next year’s team to follow and build upon.”

Since January this year, Bhubesi Pride has had its online application open to rugby lovers and coaches. In a rigorous selection process, candidates from all over the world submitted their entries in the hope that they would be picked for Bhubesi Pride’s 2013 ‘Expedition Coaching Team’.

In August that process was completed and 6 guys were chosen, representing the UK, US, France and Mexico. Ryan Jones, Ben Illingworth, Mike Coogan, Jonathan Markowitz, Guillaume Boisseau and Juan Pablo Andrade will join Richard in London in January, head to Addis Ababa, Ethiopia, and begin their mission to unite, empower and inspire communities through the game of rugby with pupils and staff in ten African countries. Next year’s expedition will take close to six months.

“I am continually humbled and so impressed by not only the calibre of the individuals that apply, but peoples’ willingness to take this amount of time away from their personal and professional lives, and contribute to rugby and community development in Africa. Next year’s team boasts unbelievable talent, experience and knowledge and I cannot wait to work with the guys, and for them to support the efforts of our friends in Africa!”

Mexican, Juan Pablo Andrade, is one of two selected team members that came to learn of Bhubesi Pride through Rugbydump. Captain for the national 7s and 15s set-up, ‘JP’ says, “If you asked me what I am looking forward to, I’d say the heat, mosquitos, unfamiliar food, awesome views and excellent human interactions. But most importantly, it is what are we throwing back to the continent… and that is a lot of rugby!”

We’ll be following the progress of the team next year, paying close attention to how JP and Guillaume – our other RD ambassador – cope on their African rugby journey.

Ensuring the sustainability of an initiative of Bhubesi Pride’s scale is no simple task. Indeed the ‘Pride’ has now partnered with SA Rugby Legends Association to help improve rugby leagues and staff training in-country, in addition to its existing relationships with key NGOs, national rugby unions and government departments.

“We have a terrific operation working with great people in 11 locations in ten African countries and we can give a lot back to companies who partner with us. Bhubesi Pride now offers leadership development for corporate staff, as well as high impact CSR and branding benefits, so working with us benefits businesses as much as it does our communities”.

If you’re keen to coach rugby in Africa next year, or get your business and staff involved, follow this link to Bhubesi Pride’s website to find out more VISIT AFRICA

With more businesses and individuals keen to ‘join the Pride’, Bhubesi Pride has shared with Rugbydump an exclusive interview with SA Rugby CEO, Jurie Roux, about how they too are looking to collaborate and support. View the chat with Jurie below.