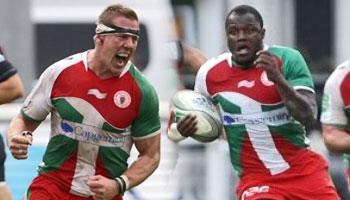 Biarritz scored two fantastic tries as they beat Saracens 15-10 in the Heineken Cup on Saturday afternoon. The game took a while to get going, with scores tied at 0-0 at halftime, before the first of the home side’s great efforts sparked things into life.

It’s not often we see sides head into the break scoreless but this one went that way as defense was tight and execution perhaps lacked at times. At 3-0 up to the visitors Biarritz decided to have a crack from deep in their half, which resulted in a fabulous team try that went the length of the field.

Talisman Imanol Harinordoquy, who relishes in these European Cup games, got on the end of it after a Dane Haylett Petty kick found some space.

Their next try was even better, as Eagles flyer Zee Ngwenya got on the end of a neat switch pass and proceeded to gas everyone in sight. In fact he made it look easier, and made a few of the Sarries guys look decidely average as he blitzed the cover and flew in for a wonderful try.

Saracens did score a vital losing bonus point, but felt they could have possibly picked up more.

“At 15-3 down in France, with a vocal crowd behind their team, it is easy to fold but we didn’t and could have scored more tries,” said Director of Rugby Mark McCall. “We showed a lot of character and skill in that final quarter to come away with the try.”

It seems a long time ago that Ngwenya hit the scene at the 2007 RWC in France, but his try shows that the man still has incredible finishing ability when called upon in a little bit of space. These were surely two of the tries of the weekend, and perhaps the tournament so far.