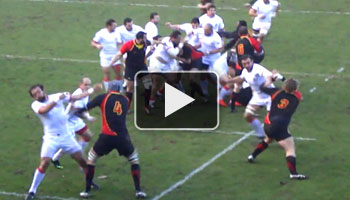 The Six Nations B got under way on Saturday with a Rugby World Cup 2015 qualifier between Belgium and Georgia in Brussels. Unfortunately the game started off in poor spirit with a huge brawl between the two sides.

Favourites Georgia have have a few French based players and have played in three World Cup’s already, so Belgium were the underdogs, but managed to give them a bit of a scare, leading 13-3 early in the second half.

Georgia’s experience told though and they came back to win the match 17-13.

Both sides were fired up and within minutes of kick off things turned ugly, with Montpellier’s big bruiser Mamuka Gorgodze in the thick of it. It was difficult to see what started it other than possibly a dummy run in midfield that led to contact.

The referee opted to red card a player from each side, as props Davit Kubraishvili of Georgia and Maxime Jadot of Belgium were sent off.

Update: Another angle of the fight is shown below

Credit to the uploaders