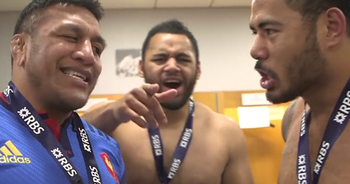 Billy Vunipola was one of the players that Eddie Jones has commented on numerous times during this Six Nations, impressed with his work ethic and ball carrying ability. He never got around to mentioning his lip syncing or dance moves though, which is a poor oversight.

Vunipola ‘video bombed’ a dressing room chat between brother Mako and Manu Tuilagi during England’s Grand Slam celebrations. As the interview went on, shirtless Billy got into the full routine, clearly familiar with the words to the Backstreet Boys classic, I Want It That Way.

It made for amusing viewing indeed, and revealed a bit more about the man touted as the front runner for this year’s Six Nations Player of the Tournament. With three Man of the Match awards to his name, it’s no surprise that Vunipola is not only on the shortlist, but many people’s favourite.

“Three man-of-the-match awards in the tournament is unheard of. If he’s not player of the tournament, I don’t know who is,” said England scrumhalf Danny Care.

Still only 23, Vunipola played every minute of the Grand Slam campaign, and has become a key member of Eddie Jones’ armoury, as the new coach turned a disappointing RWC 2015 around.

“Eddie has asked me to try to be fitter and to try to stay in the game as much as possible,” he said.

“You have to try to be smart about it. You have to pick your moments. In the first half on Saturday I realised France were looking for me a little bit so I tried to put myself in places where I was more likely to make an impact. Luckily I did that.

“The biggest thing for me is just enjoying my rugby,” said Vunipola recently when commenting on how he has changed his approach, compared with a few seasons back.

“I’m putting less emphasis on rugby as a whole. It’s something that I do but it’s not my whole life.

“We [the squad] focused on a lot of the off-the-field stuff. A little drink in a pub [although Vunipola doesn’t drink] is never going to kill you and it opens people up and you talk about things other than rugby. You can see that we are much closer than we were five months ago.”