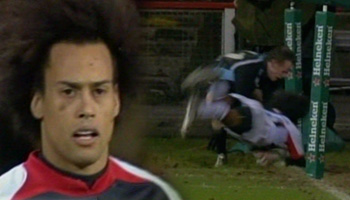 Saracens met Glasgow in a Round 6 Heineken Cup encounter that was played in howling wind and rain on Friday night in Scotland.

Less than 5 minutes into the game Glasgow Warrior Hefin O’Hare nearly profited when Richard Haughton hesitated on defence, hoping a high kick would go out. But, after racing onto the bouncing ball the former rugby league man O’Hare just put a foot in touch and was rightly called back.

The incident seemed to wake the Saracens speedster Haughton up and when Jackson drilled a low kick into the Glasgow touch-in-goal area, it was this time O’Hare’s turn to hesitate, as he waited for the ball to run dead.

Haughton used his express pace to hunt down the ball and the Television Match Official ruled he had dived to touch down millimetres inside the line.