Blues score a try from a quick lineout - Poor refereeing 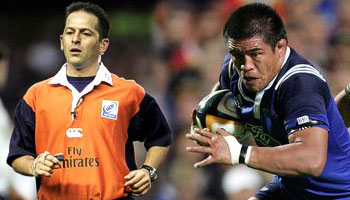 This is a controversial incident from the Blues vs Force game. The ball is kicked into touch but the Blues take the quick lineout with another ball, which results in a try. This is against the laws of the game, and the Blues know that.

It’s amazing that the ref and his touch judge couldn’t see this.

In Jonathan Kaplan’s defence, he went on what the touch judge, James Lekkie, said he saw.

The Ref and Touch Judge are taking all the flak for this, but I feel that there’s a degree of bad sportsmanship involved here also. Ali Williams is the player who catches the other ball and tosses it in. He should never have done so.

Yes, you take what you get, but that doesn’t make it right.

Surely the TMO should be allowed to intervene in situations like this. Two weeks in a row we’ve seen incidents where if the TMO ruling were more flexible, it would make the game smoother, and there wouldn’t be cock-ups like this.

(d) For a quick throw-in, the player must use the ball that went into touch. If, after it went to touch and was made dead, another ball is used, or if another person has touched the ball apart from the player throwing it in, then the quick throw-in is disallowed. The same team throws in at the line-out.