Brad Thorn gets one week suspension for spear on Smit 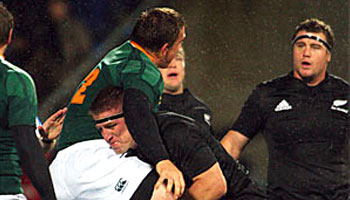 Brad Thorn has been banned for one week and will miss New Zealand’s second Tri-Nations Test against South Africa next weekend. The 33-year-old lock was cited by citing commissioner Tim Harland for a tackle he made on South African hooker John Smit in the sixth minute of Saturday’s 19-8 Tri-Nations win in Wellington.

After slight provocation by Smit, Thorn picked him up and dropped him on the ground after the whistle, sparking a mass brawl which oddly enough saw no punches thrown or more importantly, landed.

Miraculously, referee Stuart Dickinson only penalised Thorn, opting not to give him a yellow or red card, which judging by their reactions, was a pleasant surprise for both Thorn and captain Rodney Sooialo.

Smit later left the field with a groin injury which he said developed after he was treated “like a tent peg.”

Thorn was later cited by the match commissioner, and not by the Springboks.

“Mr Wheelahan (SANZAR judicial officer) said the conduct was an act contrary to good sportsmanship rather than a dangerous tackle,” New Zealand Rugby Union said in a statement.

“After taking all matters into account, including Thorn’s previously excellent record as well as the sanction guidelines prescribed in the IRB Regulations, Mr Wheelahan imposed a suspension of one week.”

After the Test, Smit described the tackle as a “heat of the moment” incident and said Thorn had immediately apologised.

“It’s part and parcel with any combative situation between All Blacks and Springboks,” the Springbok captain and hooker said.

“The first thing he did was come and say sorry and that it was unnecessary. There are no personal issues with things like that.”

Anthony Boric is likely to be Thorn’s replacement for next week’s Test in Dunedin.