Brazil make history with stunning victory over the USA 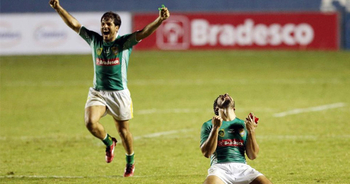 Last week we showed you Brazil’s historic first encounter with Canada in the Americas Rugby Championship. Now the South Americans have created yet more history, as they stunned the USA 24-23 with a last-minute penalty in Sao Paulo.

The home side, who had lost all their previous games in the tournament, started the match in fine fettle by storming out to a 13-0 lead courtesy of a Daniel Sancery try.

Early in the second half, they continued to lead 18-8 as the USA fought back into the game through a Joseph Taufete’e try. But Brazil came on in leaps and bounds and, as you will see in the match highlights below, looked a far more composed and mature side than at the start of the campaign.

The USA dominated the second half as much as the Brazilians dominated the first. They scored a brilliantly worked team try through Aladdin Schrimer which brought the visitors back to within one score.

A further penalty for Brazil and a third try for the States from Niku Kruger saw the latter close to within one point. The USA took the lead through a penalty to lead 24-21.

But the match wasn’t over yet.

Brazil crucially won a penalty in the very last minute and from 15m out, man-of-the-moment Moises Duque dutifully slotted the match-winning penalty kick to ensure his country’s first ever win over a Tier 2 Nation and their first of the Amercias Rugby Championship campaign.

They now face Argentina XV, who put over 50 points on Canada in their week 3 win.

You can view match highlights of Brazil’s historic triumph below, and the post match celebrations on page two, as well as the option to watch the full match

Celebrations in the stands and the changerooms: