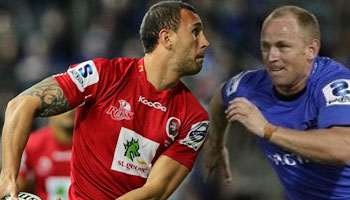 The good news is it’s Friday. The bad news? There isn’t any, it’s Friday. For most of you that will mean knocking off work early (if you haven’t already), hooking up with mates, and watching rugby all weekend. Here’s two clips to start it.

The first comes from last weekend’s Super Rugby game between the Reds and the Force, a game that the Reds won in the dying moments thanks to a long pass from flyhalf Quade Cooper.

Earlier in the match Cooper took a big hit though from fiery scrumhalf Brett Sheehan as he passed infield. Sheehan, despite being short in stature, punches well above his weight and pretty much resembles an angry pitbull. Of course Cooper was there for the taking and probably off balance, but it was a big impact, so well worth sharing with those big hit lovers out there.

The second clip here is a lot more tragic in nature, although somehow the Aussie sense of humour manages to make light of a serious situation, and not necessarily in a bad way.

You might have heard about Waratahs and Wallabies back Berrick Barnes having experienced a few big knocks of late, and complaining of experiencing bad headaches. It’s now got to the point that he’s made the decision to hang up his boots, until things improve.

It’s a big call so close to a Rugby World Cup that he would no doubt be a big part of, but it sounds like his hands were tied in terms of what he can and can’t do on the field and in training, so we wish him all the best for the near future, and hope to see him out there playing for the Wallabies at the world cup in New Zealand later this year.

Below are both clips, the first being the hit on Cooper, and the second being a discussion on The Rugby Club about the Barnes situation.

On a sidenote, there have already been two games of Super Rugby this weekend, but tomorrow will be what decides the positioning on the final table. To find out how that all works, we’ve got a handy explanation that outlines who will finish where, who plays who, etc. .