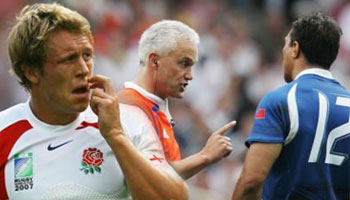 Brian Lima’s career is effectively over. The Zidane of this years Rugby World Cup has been suspended for three weeks for this high tackle on Jonny Wilkinson, and with Samoa not making it to the next round means we won’t see the veteran in World Cup action again.

Lima was spoken to by the referee for the high tackle during the England vs Samoa clash, but the Judicial Officer involved in the citing felt it deserved further punishment.

“The tackle was inherently dangerous and the swinging right arm of Brian Lima connected with considerable force on the neck/throat of Jonny Wilkinson.”

Three weeks for this tackle is once again inconsistent and harsh in this instance, but perhaps had a little something to do with his previous big hit on Andre Pretorious that went unpunished.

Either way, we bid farewell to The Chiropractor, who made an invaluable contribution to Samoan and world rugby over the years.